The history of the Reman Sultanate began in 1810 when Tuan Tok Nik Tok Leh, a Patani royal, led an insurgency in gaining Reman’s independence from Patani. He eventually succeeded and declared himself as ruler of Reman. Reman was historically part of Patani (which is now a province of Thailand). The protracted war between these provinces weakened both sides. The neighbouring kingdom of Siam saw this conflict as an opportunity to spread its power to the south, and both Reman and Patani became suzerainties of Siam.

Map of the state of Reman in Hulu Perak between the 17th and 18th century. (Source: Google Images)

The maxims of divide et impera or divide ut regnes[1], practised in Roman times and during the British occupation of the Malay States, were applied by Siam after a series of attempted rebellions which prompted Bangkok to divide Patani into seven smaller states:

In spite of Reman being a suzerainty of Siam, Tuan Tok Nik Tok Leh remained as ruler of Reman, which at that time was wealthy with tin. In fact, tin was the predominant factor for the strained relationship with Perak in few years later of which again benefited Siam. In 1821, Perak was forced by Siam to periodically send bunga emas tributes, as tokens of fealty. However, after a few years, Sultan Abdul Malik Mansur Shah (1806-1825) presented to Rama II, the King of Siam, a twenty-toed elephant named Chapang Pileh (‘the chosen one’), found by Toh Muda Panglima Kinta Ngah Abdul Sam in the jungles of Kinta. This so pleased Rama II that he released Perak from Siam’s suzerainty.

Given the weak position of Perak at that time, Tuan Tok Nik Tok Leh was able to take Hulu Perak which included Klian Intan which was rich in tin. In an attempt to recapture Hulu Perak, Sultan Abdullah Muazzam Shah (1825-1830) sought assistance from the English East India Company. Consequently, the Burney Treaty[2] was inked in 1826 between Siam and the English East India Company amongst the terms of which that Perak was to officially be given independence from the suzerainty of Siam as promised.

Immediately after gaining independence, Sultan Abdullah Muazzam sent an army to Hulu Perak led by Dato’ Seri Lela, who was accompanied by his newly wedded wife, Raja Andak binti Sultan Ahmaddin, Sultan Abdul Malik’s sister. Raja Andak was very beautiful and it was no surprise that it was said she had been married 13 times prior to her marriage to Dato’ Seri Lela.

The attack led by Dato’ Seri Lela in Hulu Perak caught Tuan Tok Nik Tok Leh by surprise , following which he then fleed from Kubu Kapeh (later known as Kampung Kapek) to Klian Intan and then to Kuala Kepayang. Whilst the attack did not deter Tuan Tok Nik from seeking revenge, at the same time he was attracted to the beautiful Raja Andak. He then sent his people to Kubu Kapeh to spy on Raja Andak and to his delight, it appeared that the marriage of Raja Andak and Dato’ Seri Lela was on the rocks. Tuan Tok Nik secretly sent a letter to Raja Andak which contained few stanzas of pantun describing his feelings towards the princess:

This forbidden love affair then led to bloodshed, as Dato’ Seri Lela was murdered while having a picnic at Cheroh and Raja Andak was felt to be the perpetrator in the eyes of Dato’ Seri Lela’s people. Raja Andak was scared for her safety and ran into hiding, while Tuan Tok Nik took this opportunity and marched on to retake Klian Intan, Kroh[3] and Kubu Kapeh. Kuala Kapeh was then left under the purview of Tuan Tok Nik’s daughter, Tok Nang Sikuat.

1836 was an important year to Reman for two reasons. Firstly, Captain James Low who was the Acting Resident Councillor of Prince of Wales Island (Penang) became the first European to have visited Klian Intan and Kroh. Secondly, it was the year that Tuan Tok Nik died. He was interred at Langgar Bendang Saring in Reman and was succeeded by his son, Tuan Nik Ulu.

During the reign of Tuan Nik Ulu, there were a few battles between Reman and Perak over border issues, mostly won by Reman under the leadership of Mengkong Deleha, a renowned Reman warrior.

Tuan Nik Ulu was succeeded by his son, Tuan Jagong (titled Phya Chawang). Sadly, he was the last ruler of Reman as both of his sons died before him. His first son, Tuan Menang was sentenced to death in 1892 by Chau Khun (Governor of Siam) apparently over his ‘violent actions’ towards the people of Reman.

His younger brother, Tuan Lebeh, on the other hand, was much a kinder person and loved by the people. He was appointed as the Raja Muda, the heir assumptive of Reman, and was styled Tuan Lebeh Long Raya, Raja Muda Bakak Bangkok.  Unfortunately, Tuan Lebeh was accused of conspiring with Tengku Abdul Kadir, the ruler of Patani, to rebel against Siam . He was then brought to Court in Singgora (now known as Songkhla) and was sentenced for imprisionment of either 25 years in Singgora or 20 years in Bangkok. Tuan Lebeh chose the latter sentence. During the journey to Bangkok, tragedy struck when ‘Chamroen’, the ship that carried Tuan Lebeh, sank. Saddened by the death of his son, Tuan Jagong died a few weeks later, regretfully without a successor. 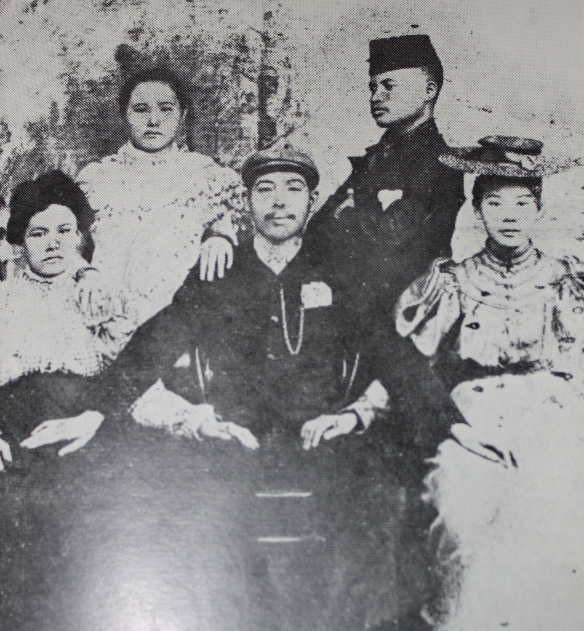 Tuan Lebeh, the Raja Muda of Reman, with his friends.

The border issues between Reman and Perak only came to end after the signing of the Anglo-Siamese Treaty (also called the Bangkok Treaty of 1909) between the British (led by Sir John Anderson, Governor of the Federated Malay States) and Siam (led by the Foreign Secretary of Siam) which occurred very much later on 10 March 1909 in Bangkok. The Bangkok Treaty dictated that Reman in Hulu Perak was to be returned to Perak and this had nailed the coffin shut, as it were, to the demise of Reman’s sultanate. The retrocession of Hulu Perak was held on 16 July 1909 in Kroh which was attended by: 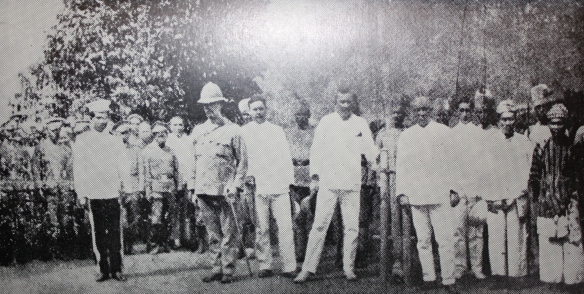 Photo taken on 16 July 1909 in Kroh after the retrocession of Hulu Perak.

The retrocession denotes the end of the state and the Sultanate of Reman, just like many small kingdoms in Southeast Asian history which enjoyed short periods of real independence and have long since disappeared.

Footnote:
[1]Divide and rule – a combination of political, military and economic strategy of gaining and maintaining power by breaking up larger concentrations of power into chunks.
[2]Named after Captain Henry Burney. The Burney Treaty stated that Kedah, Kelantan, Perlis and Terengganu were Siamese provinces while Penang and Province Wellesley belonged to the British while Siamese would not interfere with British trade in Kelantan and Terengganu.
[3]Kroh or Keroh is currently known as Pengkalan Hulu. It is a town within Hulu Perak bordering Thailand and Kedah. The nearest town on the Thai side is Betong in Yala province. Although described as a border town, Pengkalan Hulu is 7 km from the actual border which is located at Bukit Berapit, where the Malaysian customs, immigration and quarantine station is located.

32 thoughts on “The state of Reman in Hulu Perak”