Under the Sultan, whose full title is “Duli Yang Maha Mulia Seri Sultan, Yang Di-Pertuan Negeri Perak Darul Ridzuan”, there is an interesting system of nobility and chieftainship or known as Orang Besar Negeri dating back to the earliest years of the State, back in sixteenth century.

R.J. Wilkinson in his Notes on Perak History pointed out that the Sultan was theoretically absolute, but he was expected to obtain the consent of his principal chiefs before he appointed any high officer of state or took any step of great importance to the state. He also added that if left consulted, the chiefs were apt to affect ignorance of the decisions arrived at, to refuse to recognise the Sultan’s nominees, and even (by questioning the authenticity of documents) to decline to obey the Sultan’s orders. It was the rule in the olden days that the Sultan should be succeeded by the heir apparent or Raja Muda. Nonetheless, the approval of the chiefs was still necessary. Back in the old days, the procedure was that when a Sultan mangkat, the Bendahara, or chief minister, would at once take the possession of the regalia and to administer the government as regent.

At the expiration of seven days, he would send or head a deputation to invite or escort the Raja Muda to the Istana. On his arrival, the Raja Muda would be presented with the regalia and would be formally installed as the new Sultan in the presence and with the approval of the assembled chiefs. In the early days, the Bendahara was a commoner[1] and was regarded as the head of the chiefs, but later members of the royal families, several branches of which share the throne in rotation, were appointed to this high office as Raja Bendahara. The Raja Bendahara is, however, still regarded as the head of the chiefs, although he is a Raja[2].

Under the Raja Muda come princes of the blood, known as the waris negeri and, in default of any special title, they are addressed as Engku. The Raja Muda’s full Malay title is Duli Yang Teramat Mulia Tuanku Raja Muda, Wakil us-Sultan. The waris negeri are eligible for offices of state and for certain titular dignities carrying high precedence. The present honorary distinctions in order of rank are the DYAM Raja Di-Hilir, Raja Kecil Besar, Raja Kecil Sulong, Raja Kecil Tengah and Raja Kecil Bongsu.

Footnote:
[1]The early Bendaharas were descendants of Megat Terawis, the last being Megat Abu Kassim (Megat Hilang Di-Teluk) during the reign of Sultan Iskandar Dzulkarnain (1754-1764).
[2]The last Raja Bendahara was Raja Abdul Rashid ibni Almarhum Sultan Idris I, and following his demise, the position of Bendahara was returned to non-royals.

The title of Dato’ Panglima Kinta originated during the reign of Sultan Mudzaffar Shah II in 1636. For services rendered, Tok Chandang, son of Tok Changkat Piatu was appointed Maharaja Kinta (title later changed to Dato’ Panglima Kinta) and his wife Che Intan, daughter of Tok Nyior Manis, made a Toh Puan (first Toh Puan of Perak). Wilkinson had described that the succession to this dignity is a good example of the bergilir principle – where two families (the Ipoh or Paloh family and the Kepayang family) took it in turn to provide the Dato’ Panglima Kinta. 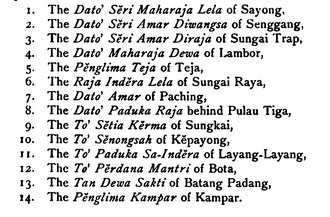