SembangKuala is one year old today and in commemoration of this, we humbly present to you this updated post on Almarhum Sultan Idris I.

Sultan Idris Murshidul Azzam Shah. This photo was taken in 1911 at the famous Lafayette Studio in London, and is currently held at the V&A Lafayette Collection.

As a young man, Raja Idris had already shown a keen interest in education, especially that of Islam, a characteristic he exhibited throughout his life. Among his religious teachers were Sheikh Mohd Tahir Jalaluddin[1] and Syed Abdullah bin Abu Bakar Al-Attas (kadhi of Perak). Raja Idris later learnt English from a few of British administrative officers, which included M.E. Holmes, the District Magistrate and Collector of Land Revenue.

In 1876, Raja Idris was appointed as a judge on the examination of those who were charged with complicity in the assassination of J.W.W. Birch (the first British Resident of Perak). The assassination of Birch culminated in the Perak War (1875-1876) between the British forces and the Perak Malays. During the trial, his fellow assessors were J.G Davidson and Frank Swettenham. Raja Idris was later appointed Chief Judge of Perak, and between 1883 to 1897, he was invited by the Straits Settlement Government to assist in the settlement of a dispute over the definition of the boundary between Perak and Kedah, and Melaka and Rembau. Later as Sultan, he revised the primeval code of Perak Court customs and procedures, and the traditional and royal titles, with the approval of the State Council. This includes the creation of the office Orang Kaya-Kaya Setia Bijaya Di-Raja in place of the then defunct Orang Kaya Kaya Seri Agar Di-Raja Putra (following the conviction of Dato’ Maharaja Lela). Jeragan Abdul Shukor bin Mohamad Ali was the first holder of this title.

When Sultan Yusuf Sharifuddin Muzaffar Shah ibni Almarhum Sultan Abdullah Muhammad Shah I was finally installed as the 27th Sultan of Perak[2], Perak was declared a British protectorate on 11 May 1887. Raja Idris was then installed Raja Muda by the Perak State Council[3], apparently with strong support from Hugh Low, the then British Resident of Perak. However, about two months after the installation, Sultan Yusuf mangkat on 26 July 1887 and Raja Muda Idris was proclaimed the 28th Sultan of Perak at the age of 38. Sultan Idris was formally installed with the title Sultan Idris Murshidul Azzam Shah on 5 April 1889. 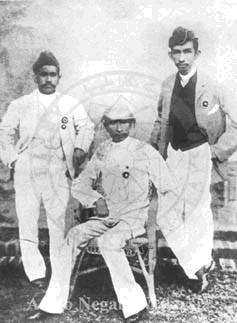 Previously, all the previous Sultans of Perak resided on the right bank of the Sungai Perak, as per agreement made by the 1st Sultan of Perak, Sultan Muzaffar Shah, with Tok Temong. However, Sultan Idris chose to reside to the left bank on Bukit Chandan. A palace called Istana Idris (later renamed as Istana Negara) was erected on Bukit Chandan in 1895. It was then demolished, giving way to the construction of Istana Iskandariah in the early 1930s. Besides Istana Negara, there were other istanas built, like Istana Chinta Berahi for the Raja Perempuan Nuteh Aishah binti Almarhum Sultan Yusuf Sharifuddin and Istana Kasar Ma’amor for Tengku Permaisuri Uteh Mariah binti Haji Sulaiman.

It was during the time of Sultan Idris that Perak became part of the Federated Malay States. Perak then saw a vast economic growth from its export of tin and rubber. The first rubber tree in Malaya was planted in Kuala Kangsar by the botanist Henry Ridley.

Sultan Idris was regarded as one of the most influential sultans in Malaya at the time,  as seen from the inaugural Durbar in 1897  held at the Istana Negara in Kuala Kangsar. Sultan Idris’ thinking was ahead of his time and he strove to meet the needs of his rapidly changing state and her rakyat. One of his principal concerns was education, of both Western or religious styles, and he was instrumental in the establishment of both the Malay College (Bab-ul Darjat was a lesser known name of the College) and Madrasah Idrisiah in Kuala Kangsar. Even after his passing, his vast contributions towards education of his rakyat was recognised and the Sultan Idris Training College in Tanjong Malim was named after him.

Sultan Idris in the robe of a Knight Grand Cross.

Sultan Idris was also a staunch advocate of increased Malay participation in the ranks of the state administration. To walk the talk as it were, one of his sons, Raja Alang Iskandar (later Sultan) joined the F.M.S. Police Force.

In recognition of his role in the modernisation of Perak and and his vast contributions to the welfare of his rakyat, Sultan Idris received a number British honours – the CMG in 1884 and KCMG in 1898 from Queen Victoria, GCMG in 1901 from Edward VII and GCVO in 1913 from George V.

During his lifetime, Sultan Idris had visited England four times:

1. 1884 – with Hugh Low and Raja Ngah Mansur ibni Sultan Abdullah Muhammad Shah II, to request for the return of the Perak Royal Regalia which were kept in England since 1876 during the Perak War. 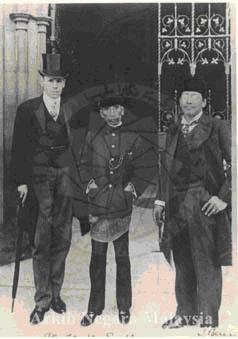 2. 1888 – by invitation of Queen Victoria for her Golden Jubilee, after his proclamation as Sultan of Perak. He was again accompanied by Hugh Low and Raja Ngah Mansur ibni Sultan Abdullah.

3. 1902 – for the coronation of Edward VII but the trip was postponed. During the trip, his son, Raja Alang Iskandar (then aged 21) followed him back to Perak after seven years in England, five of which were at Balliol College in Oxford.

4. 1911 – for the coronation of George V, and he was accompanied by Tengku Permaisuri Uteh Mariah, Raja Harun Al Rashid, Raja Abdul Rashid, Raja Chulan, Raja Puteh Kalsom Sultan Idris (wife of Raja Chulan) and Enche’ Yeop Nordin, Toh Muda Orang Kaya Setia Di-Raja. It was during this trip that Sultan Idris bought the Aigrette which was later added to the Perak State Regalia.

Upon returning to Perak in 1911, Sultan Idris health was under par and he rested at Port Dickson. Whilst recovering, he made a nazar, should he be restored a good health, he would build a mosque in Bukit Chandan. His vow later materialised with the erection of Majid Ubudiah but he did not live to see it completed.

Sultan Idris mangkat on 14 January 1916 at the age of 67. He was interred at the Royal Mausoleum, Kuala Kangsar with the title of Marhum Rahmatullah.

In the course of his life, Sultan Idris married seven times:

The present Perak Sultanate is derived from his lineage. In addition, the Sultan Idris I lineage has links with other royal households in other States, namely Selangor and Pahang. Click here for the family tree of Sultan Idris I.